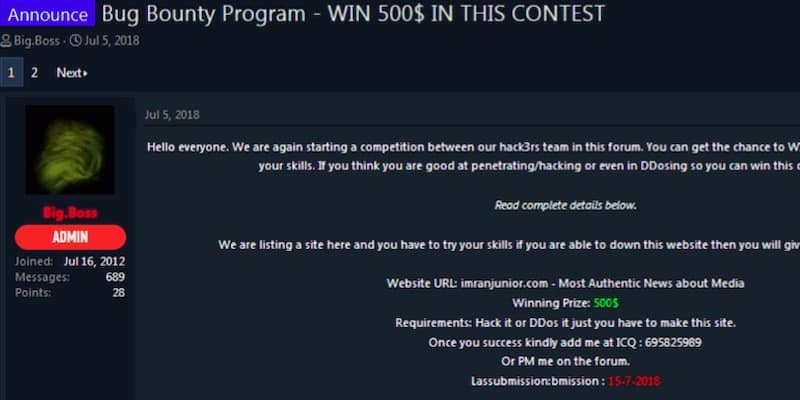 Russian-language cybercriminal forums aren’t the only ones to host competitions.

In January 2020, we published a blog about competitions on Russian-language cybercriminal forums. This blog explored the Russian-language forum competition model’s development: Contests changed from small, innocent tournaments hosted by individual members to the forum-wide competitions with sponsors and large cash prizes seen in recent years, requiring forum users to have specific skills and knowledge to participate.

English-language cybercriminal forums seem to have recently developed distinct trends and competition formats that set them apart from their Russian counterparts.

It’s time to, yet again, dive into the cybercriminal world of competitions, prizes, and awards galore.

Competitions on English-language cybercriminal forums: A (lack of) history

The evolution of competitions on English-language cybercriminal forums is admittedly tricky to assess, as the life cycles of many are often either short-lived or plagued by downtime and sporadic inactivity. Examples include Dark0de, a prominent forum taken down by law enforcement in 2015, and Envoy, which has, in the past couple of months, repeatedly suffered from distributed denial of service attacks (DDoS) and subsequently has experienced downtime.

There have, of course, been exceptions. The BitsHacking forum started hosting regular competitions soon after its creation in 2012, with its most recent competition announced in late 2018. This example provides us analysts with a certain amount of insight into the somewhat-fluid evolution of competitions. But because BitsHacking seems to be the exception rather than the rule, as an individual case, it is not enough to draw any substantiated conclusions.

Even though the forums that have recently organized competitions have not individually done so long enough for any historical patterns to appear, there are plenty of discrete cases of English-language forums hosting contests out in the wild. When we combine these cases for analytical purposes, a clear set of conventional notions and features emerges.

More often than not, competitions tend to be forum-wide contests with prizes varying from small cash or non-cash prizes (such as tokens added to the winner’s profile banner) to short-term VIP subscriptions. The competitions are almost exclusively arranged by the forum administrator and staff, rather than individual members. In cases where the competition has been set up by a single forum user, the competition and its organizer must be officially approved by the administrator beforehand.

The events are usually innocent, “just-for-fun” competitions with simple formats that require minimum effort from the forum administrators. Here are some examples:

Most of these might not be considered “competitions” in the traditional sense. Still, they can be viewed as a way of getting members to compete against each other without going through the effort of organizing large, more complex competitions that require more oversight and resources.

BitsHacking is one of the odd ones out in the group, being one of the few forums to have hosted more traditional competitions regularly over an extended period, including:

The most recent competition it hosted was, interestingly enough, the first instance on the forum that required participants to showcase their “hacking skills” to take down a named website, with the winning hacking team receiving USD 500.

Except for BitsHacking's most recent contest, all its events have been relatively innocent and pure competitions, with small prizes and straightforward formats that have not required much effort from the administrator.

Another compelling case to note is a recent tournament hosted by Nulled. Although the forum had previously only hosted Member of the Month awards, in early to mid-April 2020, a high-ranking forum member organized an official Counter-Strike: Global Offensive tournament (with the blessing of the forum administrator).

The tournament had 80 participants divided into 16 teams of 5. Despite being the first instance of an online gaming tournament hosted on Nulled (and across forums with a higher profile), the contest was still relatively innocent and fun. There was a small competition prize: The winning team received the grand prize of EUR 50, with a member of the winning team receiving only EUR 10 each).

Despite similarities, there have been indications of a divide in terms of the type of competitions seen on smaller, up-and-coming forums and those hosted on higher-profile sites. The smaller, and perhaps less recognized, forums have tended to use competitions as a way of acquiring and keeping new members, as exemplified by the referral competitions and monthly newcomer competitions on BitsHacking, and the Member of the Month awards on Cracked TO and Nulled. Such competitions potentially allow forums to acquire new users, and winning these types of contests on smaller forums also enables users to gain a reputation quickly, subsequently giving them more reason to stay.

On the other hand, higher-profile forums, such as RaidForums and Torum, don’t seem to have intentions of using competitions to acquire new members and build reputation; they likely feel they’re already well-known enough. Instead, they use challenges or awards systems to maintain their membership, enhance a sense of community, and award users for “good behavior”.

Without these schemes, it’s difficult for members to quickly gain a notable reputation among the many forum members competing for status.

Russian-language forum competitions have, as mentioned, gone from being small-scale competitions hosted by individual members with small cash prizes or symbolic awards to forum-wide, highly renowned contests requiring skill and knowledge to participate. An example is the regular article competitions on Exploit, which require participants to write articles on highly technical subjects. Recently, prominent threat groups, such as the “Sodinokibi” team, have even sponsored contests. Winning these competitions not only means receiving a significant cash prize but involves a lot of prestige. The longevity and status of Russian-language forums, and the resources available to them, have likely enabled this development of the competition model.

Primarily due to short life span, or downtime and sporadic inactivity, forum administrators are hosting easy competitions that are open to all forum members, have small prizes, and make use of simple competition formats requiring minimum effort. The focus for the English-language sites seems to be on simple and easy entertainment, rather than prestige, money, and harnessing skills.

Another difference lies in the contests’ hosts. Individual members organized the original Russian-language forum competitions, but in more recent times, as the competitions have grown in scale and complexity, they have been arranged by the forum administrator and staff.

Initially, it’s likely more important for the forum administrators to use and control competitions as a way of acquiring new members and creating a sense of community. When the forums later become more established, such as Nulled, which recently hit the three-million-member mark, they might be more prone to loosen the reins and let members they trust host the contest, as a way to enhance the sense of community.

The future of English-language cybercriminal competitions

It’s difficult to say what the road ahead will be like for competitions on English-language forums. Given time and resources, will they eventually follow the Russian-language forum competitions’ trajectory? Most likely not.

BitsHacking forum is one of the few forums to have set up regular competitions over an extended period, following the Russian-language pattern of fun contests turning into tournaments that focus on participants’ skills and promise a larger cash prize. But BitsHacking still fell victim to what has been the bane of many English-language cybercriminal forums: inactivity.

Competitions on the forum were hosted less and less frequently during 2017 and 2018, the last year it hosted competitions. They then disappeared entirely, possibly owing to the forum’s members becoming more inactive and the community choosing to go to greener pastures.

With such behavior a regular occurrence in the English-language cybercriminal community, the English-language forums will most likely stick to the current competition model they have, for the foreseeable future. The smaller forums will probably be more prone to hosting “fun” competitions to attract members and feed community spirit. In contrast, the more established and high-profile forums will likely stick to simpler formats of award systems and easy challenges to maintain their membership.

To stay up to date with the latest on dark web monitoring and threat intelligence, subscribe to our email list below.