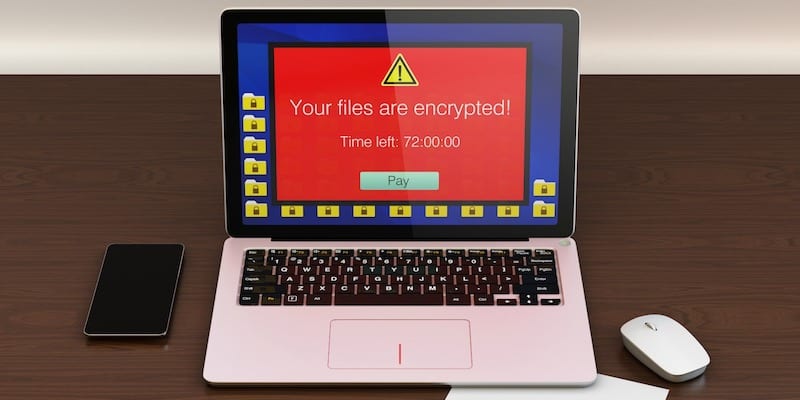 There is no archetypical cyber criminal. They come in all forms; all shapes and sizes. From those who manage money mules; to those who build and manage botnets or other forms of malware.  One of the more interesting types of cyber criminals are those who utilize and manage ransomware. According to TrendMicro, ransomware can be defined as “…a type of malware that prevents or limits users from accessing their system.”   Ransomware typically forces its victims to pay the ransom through online means in order to grant access to their machines and ultimately (hopefully) retrieve their data.  There are many types of ransomware, some, like Cryptolocker, (which was distributed by the Game Over Zeus botnet — which was taken down in late May of 2014 during a joint international law enforcement activity, Operation Tovar, and believed to be distributed by the Cutwail botnet) encrypts files and forces the victims to pay to have their data returned to them.  However, there were instances where victims reported that their files were not decrypted even after paying the ransom. According to some research organizations, ransomware is an on upswing with more and more sightings occurring very frequently.  Historically ransomware has been developed and run by single individuals seeking profit off the fears of private citizens. However, that is now no longer the case.

Did it for the Money, or Did He?

In a recent turn of events, a service called “Tox” began being advertised in the Darkweb, websites made available via anonymization services such as the TOR and I2P (networks).  There are many services offered within the Darkweb. Perhaps most well known was the criminal marketplace Silkroad that provided a ‘safe’ environment for the barter and sale of elicit drugs to users who sought and gained anonymity through the use of Tor Network. However, the anonymity of the TOR network has come under scrutiny since the arrest and incarceration of Ross Ulbricht (aka Dread Pirate Roberts). Ulbricht, like so many before and after him, believed that the TOR network would provide him with reasonable anonymity. The reality was shockingly different. Despite this, new services continued to appear within the Darkweb catering to criminal audiences. “Tox” was a new service advertised to cyber criminals who sought the capability to use ransomware but either lacked the time or ability to develop their own. This new ransomware-as-a-service was designed and run by an actor, who also used the online nickname of “Tox”. McAfee wrote up the first blog on Tox and his now infamous kit. Not much is known about “Tox”. We know that he alleges to be a teenager and a student.  And that according to his online blog (which is now down), he took the time to explain the functionality of the kit.  Additionally, he wrote that he had decided to quit the business and sell his kit (including all source code) to the highest bidder. Interestingly enough, another ransomware author, V, author of the infamous Locker ransomware announced on May 30, 2015 via a Pastebin post that he was sorry for the trouble he’s caused that he was quitting the business. His final act being the provisioning of the private keys to decrypt the files that had been encrypted. 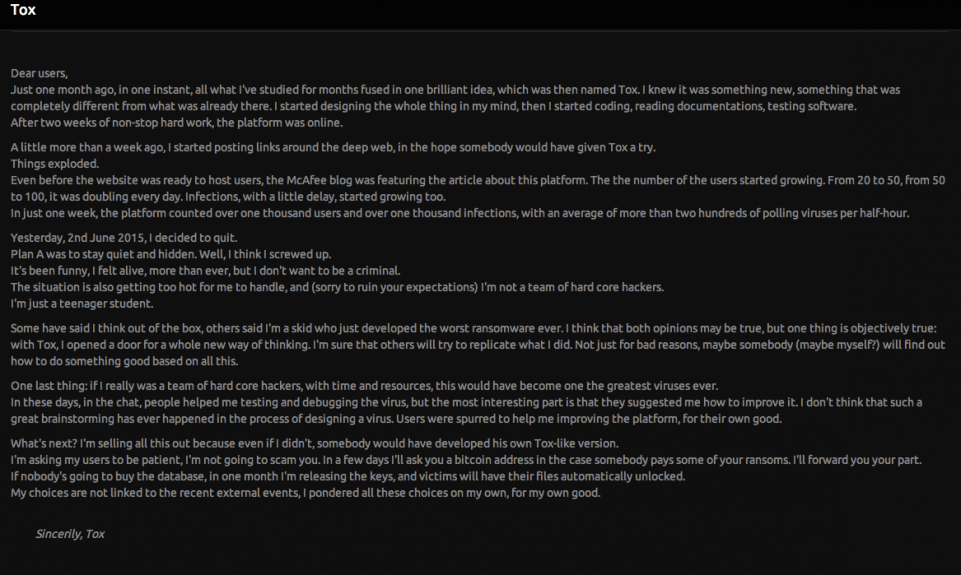 Thank You and Goodnight!

Making Sense of it All

Let’s examine these points one at a time. Tox believes that he’s not a criminal but regardless of what part of the world he is in, he would be hard pressed to defend his actions of extortion and conspiring to extort in any court. He feels as though he’s received too much attention since announcing his business model and ransom as a service kit and has become uncomfortable. This is understandable as he is, presumably, a novice criminal with little experience in the ways of criminality. This could also be fueled by the fact that he is allegedly a teenager and afraid of the repercussions of being caught.

This logic is troubling for several reasons as it demonstrates that intelligence does not equate to wisdom. What’s worse is that the very existence of Tox’s Ransomware as a Service has, as we mentioned before, changed the nature of ransomware as we know it. We can assume that if the kit works as promised that it will become an even greater threat than it already is. The very fact that a service was created for the facilitation of this type of cyber crime demonstrates that the threat landscape is continuing to morph and that the information security community and industry need to continue investing in technology and services that will promote a safe user experience for private and corporate citizens alike. As for Tox, it remains to be seen as to whether or not he will indeed stay in retirement. Time will tell.