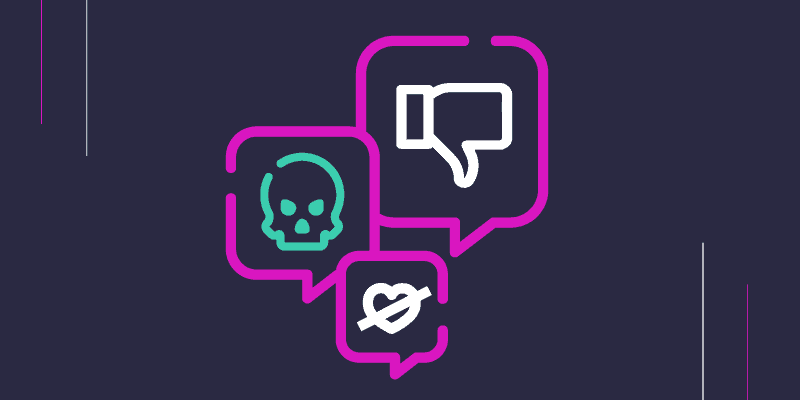 There’s no denying that social media has forever changed how we interact with one another.  Social media has been more important than ever in the past year, with many of us stuck in our homes waiting out the seemingly endless COVID-19 pandemic. Whether we’ve used our social media feeds to pass the time or connect with friends and family, it’s helped us all feel connected, informed us, or just given us a good laugh. Unfortunately, it’s also been weaponized to spread disinformation, promote scams, and, more recently, steal information from COVID vaccination cards.

These examples only scratch the surface of how threat actors can take advantage of us on social media. In this blog, we’ll explore social media-linked cybercrime, focusing on three different aspects:

Our social media accounts have become somewhat safer over the years, with significant improvements in privacy and security usually coming in the wake of some sort of social media disaster (I’ve lost count of how many times Mark Zuckerberg has appeared in front of Congress to explain “what went wrong”). The increased adoption of two-factor authentication (2FA), for instance, has helped avoid many of the single points of failure. However, just because you checked all those little boxes in your security settings to make you feel bulletproof, it doesn’t mean that your account is invincible in the face of an opportunistic threat actor.

In some cases, cybercriminals freely share knowledge on how to bypass or hijack 2FA. Ideas may include a loophole found in a given application’s security apparatus or a more elaborate scheme that requires a bit of finesse.  For example, a user on one Russian-language cybercriminal forum advertised a method for “dominating” an Instagram account. The tactic entailed hijacking an Instagram account (presumably with leaked credentials) and stealing it from a user by taking advantage of the connection between Facebook and Instagram. The method ultimately allowed the attacker to enable 2FA on their own device, giving them full control over the victim’s Instagram account.

You’ve probably heard terms such as “bots,” “zombies,” and “botnets” in recent news stories about data breaches and other cybersecurity risks. These bots are also being sold on cybercriminal platforms to target social media accounts. Unlike traditional botnets that directly infect computers to create networks, social botnets use social media platforms to create a network of fake profiles linked together to spread malicious links and content. On one Russian-language cybercriminal platform, users can be found advertising botnets for Telegram and TikTok that can reveal personally identifiable information (PII) about users.

Checkers and brute-forcers are also popular tools sold and shared on cybercriminal forums. By using credentials leaked from database breaches, attackers can employ checkers and brute-forcers to conduct credential-stuffing attacks. These attacks attempt automated login requests against websites to determine the validity of credentials and, if successful, gain unauthorized access. Gaining access to a victim’s social media account might provide a password that could be used to try and log into accounts on other sites if the victim has re-used their password. In this sense, gaining access to a social media account might be the first step in a two-stage attack.

Scammers know that the likelihood of achieving a successful attack is a numbers game – the more individuals they target, the higher the chances of success. Attackers behind email phishing attacks know this, and that’s why they often use mass mailing techniques. But the same is also true when attempting to scam users on social media platforms.  Unfortunately, these platforms have become victims of their own success, particularly in comment sections and personal messaging interfaces. These convenient tools can be a cesspool for scams promoted by fake personas and botnets. After being advertised on cybercriminal forums, mass commenting and private messenger spammers are syndicated across social media.

Social engineering skills also come into play – attackers are known to craft comments that contain malicious links coupled with a promotional slogan or clever message. For instance, a targeted attacker may monitor a social media user (aka target reconnaissance), observe they are enthusiastic about Minecraft, and then leave a comment with a link offering “freebies” for Minecraft. This link would redirect to a phishing page designed to steal the user’s credentials.

More technically sophisticated threat actors use their knowledge of tradecraft to spread malware across social media platforms. On one Russian-language cybercriminal forum, a user shared a method for disseminating an executable file in which an attacker would download a popular YouTube video, encrypt it with a remote access trojan (RAT), and then re-upload the video to their personal YouTube channel with a link to download the RAT in the video description.

Social media impersonation is another tactic that can be pretty effective. Successful impersonation scams have made headlines, especially when the person being impersonated is well known. Some of the more infamous scams have been fueled by the increasing popularity of cryptocurrency. In these scams, attackers impersonate celebrities on social media platforms and promise to provide unsuspecting victims “more” cryptocurrency in exchange for a small deposit.  Of course, the fraudsters ultimately take the money and run, and they never make good on their promise.

Adding to Facebook’s security woes, its subsidiary messaging platform WhatsApp has been the victim of recent impersonation scams. At the onset of the coronavirus pandemic in 2020, threat actors engaged in Business Email Compromise (BEC) increasingly used WhatsApp and Facebook messaging services in BEC attacks by impersonating high-level executives, lending an air of authenticity to their requests for wire transfers.

Finally, we can’t talk about cybercrime and social media without taking a closer look at the syndication of cybercriminal advertisements across social media platforms.  Just because your personal feed of cat memes and snack foods isn’t reflecting these ads, that doesn’t mean they aren’t out there. This begs the question: Why would cybercriminals advertise their illegal activity on legitimate platforms? Well, there’s really not just one single answer. But we know that many financially motivated threat actors won’t shy away from a scheme if the reward outweighs the risk (in their mind).

One type of cybercrime commonly advertised on Facebook is credit card theft. This includes users buying and selling stolen credit cards, offers of carding as a service, threat actors exchanging carding methods, and even some braggadocious fraudsters boasting about leaked CVV2 data – maybe trying to get some skin in the game.

We have observed cybercriminals advertising YouTube videos that teach hacking or advertise vulnerabilities. Some cybercriminal forums even have their own dedicated channels on social media platforms that are publicly available.  These are not only effective for sharing hacking tactics, techniques, and procedures (TTPs), but they also serve as somewhat of a recruiting tool for anyone on the Internet who wants to learn more about black-hat hacking.

The types of information openly shared in the groups include compromised financial information such as credit card numbers with PII and authorization codes, cybercrime tutorials, and commercial offerings like malware.

Just as cybercriminal platforms ban users for defrauding other members, the VK and OK admins try to shut down pages, groups, and profiles that promote fraudulent content. However, many scammers continue to use fraud-related terms like cashout, carding, and selling CCs when naming their groups and profiles.

We’ve just highlighted a few here, but there are endless other examples of social media fraud, suggesting that cybercrime on social media won’t disappear any time soon. In fact, it seems that fraud has only accelerated during the pandemic, with network defenders trying to catch up with cybercriminals’ innovative new methods. Despite security updates and patching that help ward off future threats, threat actors on social media continue to find ways to be creative and use our naivety against us.  For this reason, security awareness is one of the best tools at our disposal when we are using social media.

Because social media is such an accessible attack vector, scammers will continue to weaponize it going forward, and coordination on cybercriminal forums will almost certainly continue. If you are interested in learning more about detecting fake social media profiles, check out some of our existing research here.  If you are interested in how Digital Shadows SearchLightTM can help you detect threat actors impersonating your social media handles, you can take Searchlight for a 7-day test drive or contact us for a customized demo.

Tags: fraud / Impersonation / scams / Social Media
We use cookies on our website to give you the most relevant experience by remembering your preferences and repeat visits. By clicking “Accept”, you consent to the use of ALL the cookies. However you may visit Cookie Settings to provide a controlled consent.