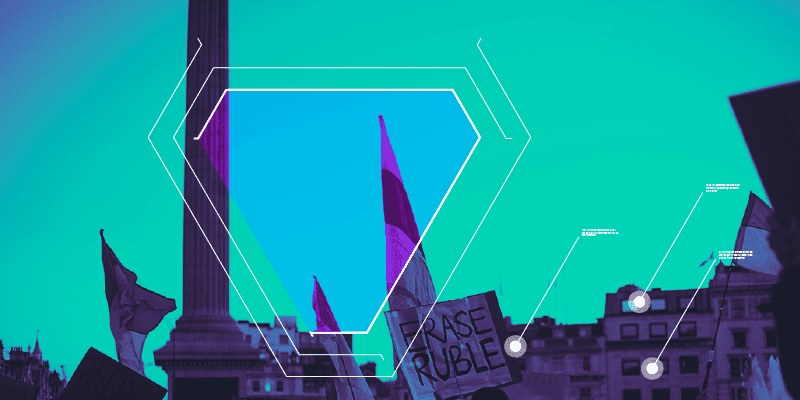 You would think that it would be nearly impossible to industrialize propaganda in the 21st century, especially with the tremendous number of independent news outlets, media resources, and diverse social media content that is accessible to us all. However, the war between Russia and Ukraine is highlighting how information can be weaponized and distorted.  If you’re curious like me, you may be monitoring a multitude of media sources to unpack the events occurring in Ukraine.  However one of these sources is not like the other 99%. I am of course referring to Russian-state media.

I wouldn’t expect you to be watching Russian-state media, but if you’ve seen any of the clips, you may be aware of the alternative universe in which Russia is conducting a “special military operation” to liberate Ukraine from Nazis. Unfortunately, the Russian state is determined to use the media to create an information bubble inside the country that justifies the invasion of Ukraine.  While the majority of the propaganda is isolated inside Russia, there is a wider information warfare and disinformation campaign being waged by the Russian Federation outside of the country’s borders.

In this blog, we’ll unpack some of the false and misleading narratives about the war from a variety of sources, and discuss what is being done to push back against them.

The Russian state controls the media

In Russia, the flow of information is controlled from the top down, and Vladimir Putin has only tightened his grip on the flow of information since the war in Ukraine began. Even prior to Russia’s invasion of Ukraine, Putin needed a pretext to justify the all-out attack.  He accused Ukraine of genocide, rampant Nazism, and of “almost creating a dirty nuclear bomb”.

Perhaps the biggest extension of Russia’s war on information is that wide-reaching, state-controlled media outlets can paint a much “rosier” picture than the reality on the ground in Ukraine. If the harsh realities of the war were presented truthfully to the Russian people, it would be much more difficult to garner public support for such a campaign that has so far involved the bombing of civilian targets, including hospitals, apartment buildings, and schools.

On the Russian state-controlled media outlet Channel One, false narratives about the war are a regular occurence. For example, on 26 Feb 2022, Channel One reported that Ukraine was firing upon its own apartment buildings in Kiev so that they could blame the Russians. In a separate segment televised the next day, Channel One asked a Russian soldier how Ukrainians were reacting to being “liberated” by the Russian Army.  The soldier stated that Ukrainians were welcoming the Russian Army with smiles, flowers, and tears of happiness.  Unfortunately, with state-controlled media dominating the airwaves in Russia, many citizens of the country believe these outlandish claims.

In an attempt to stamp out independent news outlets in Russia, the state Duma (Russia’s Parliament) implemented a “fake news” law in the country on 04 Mar 2022. This law effectively outlaws “false information” about Russia’s military actions in Ukraine and any reporting that is counter to the Russian state-controlled narrative.  In response to the harsh new law, numerous domestic and foreign publications suspended reporting in Russia or closed altogether out of concern for retribution by Russia’s government. Some Russian and foreign media outlets have been prohibited from operating in the country altogether.

It’s likely that the excessive crackdown on independent information will only get worse from here. It has been reported that Russian authorities are considering disconnecting from the global internet, and instead relocating all of their networks within Russian territory.  Despite Russia having the capability to do so, it’s unlikely to take such a drastic measure. However, in May 2019, Putin approved the country’s very own version of the internet known as RuNet, an internet service that redirects all traffic to national servers controlled by state authorities. Although it has not yet replaced the global internet, this has been perceived as an initial step towards enforcing a national intranet.

It’s no secret that the Russian government has a broad intelligence apparatus, and one of its main objectives in the last decade has been to conduct influence operations—i.e. the dissemination of propaganda and disinformation to gain a competitive advantage over an adversary.  Russia infamously conducted a large influence operation against the United States in 2016 in an attempt to impact the results of the presidential election, and also on a smaller scale in the run up to the 2020 election.

In order to promulgate false narratives, Putin often leans on Russia’s Main Intelligence Directorate (GRU), who are the intelligence directive acting as an extension of Russia’s military. In March 2022, Ukrainian Security Services reported that members of the GRU were operating a handful of Telegram accounts to spread false information about the war.  These accounts reportedly attempt to undermine the spirit of the Ukrainian people and military, by suggesting that civil conflicts among Ukrainians are making them weak, and insinuating that Russia will inevitably be victorious.

Patently false social media posts also come directly from the Kremlin.The Russian government account for the Ministry of Foreign Affairs on Twitter has repeatedly made false, and misleading assertions about Ukraine and the West.  For example, on 09 Mar 2022, the account posted alleged classified documents backdated to January 2022, “confirming” that Ukraine was preparing an offensive operation against the Donbas in March 2022. However, it’s pretty obvious to anyone that can read Ukrainian that these documents say no such thing. In fact, the documents do not contain mentions of any new operation in Donbas. Instead, they contain instructions for the battalion tactical group of the 4th Operational Brigade of the National Guard of Ukraine, and its interaction with other armed forces in Starychi, which is in the Lviv region in western Ukraine.

This account has also been used to amplify messages that Ukraine is planning to use its own nuclear and biological facilities to threaten the use of nuclear or biological warfare. While it is true that Ukraine operates biological laboratories for epidemiological research, allegations of bioweapons being manufactured in Ukraine are unfounded.  In reality, Ukraine long ago agreed to give up its nuclear arsenal after the collapse of the Soviet Union in exchange for security guarantees from Russia, the US, and the UK. Needless to say, those guarantees were never fulfilled.

The response to call out Russian propaganda has been widespread, and many entities have chosen different approaches to deal with it. In the US, government officials are focused on denouncing pro-Russian media outlets for spreading disinformation, sharing timely intelligence about Russia’s military moves and propaganda, and using intelligence to expose Russian military plans to stage “false flag” attacks designed to provoke negative sentiment against Ukraine.

Since the outbreak of the war, there has been mounting pressure on big tech companies to take action to curb the spread of Russian propaganda. Under pressure from the European Union, Facebook and TikTok have banned Russian state media in Europe. Instagram, a Facebook subsidiary, has been labeling all Russian-state controlled media outlets on the platform so that its users are conscious of state propaganda. Twitter went a step further, announcing that it would not only label content that contains links to Russian state media, but would demote that content algorithmically.

One surprising battleground during this conflict has been the information warfare on Telegram.  Hacktivist groups are increasingly using the platform to spread leaked data.  For example, the hacktivist collective AgainstTheWest has been using Telegram to share data stolen from Russian government agencies. One user noted they were using the channel to share leaks because the English-language cybercriminal forum RaidForums had been shut down.

One thriving hacktivist Telegram account is the “IT ARMY of Ukraine”, which has amassed more than 300,000 users. The group is focused on disrupting Russian websites, preventing disinformation and getting accurate information to Russian citizens. While Telegram has announced that it has plans to restrict certain disinformation channels that abuse the platform to “deepen conflicts”, their official stance on hacktivism is unclear.

Perhaps the most well-known hacktivist group of them all, Anonymous, declared a cyber war against Russia. Anonymous has claimed responsibility for disabling and defacing prominent Russian government, news and corporate websites, as well as leaking data from Russian government federal agencies.  The group also claims that it has been able to successfully mass text millions of Russian citizens to help spread the truth about the war, and even interrupt state media broadcasting with anti-war messages.

With so much noise surrounding the war in the media, it can be difficult to find reliable sources of accurate information. While it’s important to call out propaganda and disinformation pushed by the Russian state, we should also critically evaluate the media that we consume because false and misleading narratives tend to thrive in uncertain times.  We just recently learned this lesson during the COVID-19 pandemic.

Russia has become increasingly isolated from the global community during this conflict, and the government has only intensified its extreme crackdown on information and “dissidents” inside the country. As sanctions continue to grip Russia—and the war drags on—Putin will continue to need someone else to blame for Russia’s strategic military failures.  These factors will likely continue to drive Russia’s propaganda machine. With no foreseeable end to the war in Ukraine, unfortunately, the people of Ukraine stand to suffer the most. But even when the war does inevitably end, disinformation campaigns and propaganda will likely remain a core element of Russia’s geopolitical strategy.