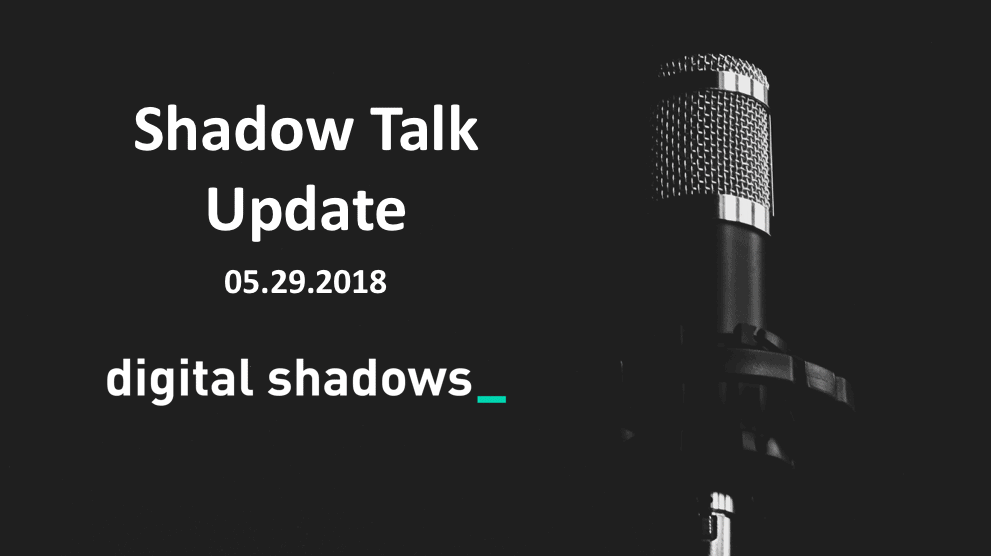 The focus in this week’s Shadow Talk is on “VPNFilter”, a modular malware with disruptive functionalities has targeted more than 500,000 network infrastructure devices across 54 countries. Recently the malware has been particularly active targeting Ukraine. The team also cover new research on the TRITON malware targeting industrial control systems, changing techniques used by the Roaming Mantis malware family, and vulnerability updates related to VBScript and the Spectre/Meltdown attacks.

The multi-stage, modular malware VPNFilter has been associated with more than 500,000 infections on “small office home office” (SOHO) routers and network-attached storage (NAS) in 54 countries. Active since at least 2016, the malware has showed spikes in activity targeting Ukraine in May 2018. Initial entry is likely accomplished through default credentials and known vulnerabilities. The malware included robust persistence and command and control (C2) mechanisms, plug-ins for C2 communication and traffic sniffing, as well as a “kill” function that can render a device inoperable. The FBI has since seized control of one C2 domain; however, it is a realistic possibility that attackers continue to control some non-rebooted devices. The activity was associated with Russia-linked threat group “APT-28”, although this was not independently confirmed. Users should reboot and reset routers, as well as apply available patches.

Security company Dragos published details of a threat actor named XENOTIME, which has been linked to attacks against industrial control systems (ICS). The group was associated with the TRISIS/TRITON malware, which targeted critical national infrastructure with disruptive intent. The group, currently active and operational since 2014, has expanded targeting from the Middle East to other geographies, including the United States. XENOTIME demonstrates in-depth knowledge of ICS, including those outside of the Schneider Electric Triconex system targeted by TRISIS malware. The group’s tactics, techniques and procedures (TTPs) included watering hole attacks, credential capture and reuse, and command line tools for lateral movement. The shift in target geography likely reflects updated operational objectives, and as this group is likely state-backed, activity will likely be influenced by inter-state political relationships.

Two working PoC exploit codes for CVE-2018-8174 were published to GitHub on 21 and 22 May 2018. This vulnerability affects VBScript scripting language, and can enable remote code execution if targeted through Internet Explorer. It was reportedly previously exploited in attacks attributed to the “DarkHotel” espionage group, and the recent release of public exploit code will likely result in widespread additional targeting. Although this vulnerability could be exploited through drive-by download attacks, it is more likely that attackers will use Word documents to deliver exploits, because a malicious Word file can force Internet Explorer to run and access the exploit code regardless of any default browser settings. Users should apply patches released by Microsoft.

On 21 May 2018 several sources published details on two additional speculative execution side-channel microprocessor vulnerabilities related to the widely reported Spectre and Meltdown PoC attacks. The vulnerabilities affected Intel, Arm and AMD products, and were tracked as CVE-2018-3640 (Variant 3A) and CVE-2018-3639 (Variant 4). Exploitation could allow attackers access to sensitive data. CVE-2018-3639 is a new vulnerability subclass titled Speculative Store Bypass. No attacks were observed in the wild targeting either vulnerability, or the original Spectre/Meltdown vulnerabilities. Some limited exploit code was published, but would likely require significant development for successful exploitation. Given the complexity of targeting these vulnerabilities, threat groups are likely to continue using less-complex attack vectors. Mitigation advisories were published by several companies, with more information expected over the coming weeks.