Adam Cook and Viktoria Austin talk through the security and threat intelligence stories of this week including an update around Phineas Fisher, where the hacker offered up to $100k in what they called the “Hacktivist Bug Hunting Program”.  The team also chats through a recent ransomware attack on Veterinary hospitals in the U.S., and some other ransomware updates.

Then Viktoria and Adam touch upon some research from our own threat intelligence team (Photon Research), specifically around the dark web, including research into Black Friday deals on the dark web, and a look at DarkMarket.

Digital Shadows analysts have discerned several trends in cyber-threat attacks and campaigns that were observed during 2019 and attributed to state-associated APT groups. They include the persistent targeting of governments and government-linked agencies for strategic information, the growing popularity of supply-chain attacks, the development of new tools, and the emergence of new groups. These trends are unlikely to disappear, and over the next 12 months we will probably see significant opportunities for APT groups to exploit new attack surfaces and target prominent events, as they continue to develop existing TTPs.

Security researchers discovered attack campaigns by a threat actor known as TA2101, targeting German companies and organizations. TA2101 sent phishing email messages spoofing the German Federal Ministry of Finance. Other organizations based in Italy and the United States were also targeted, using emails spoofing the Italian Revenue Agency and the United States Postal Service, respectively. The messages contained malicious attachments that ultimately resulted in the download of such payloads as the ransomware “Maze” and banking trojan “IcedID”.

A hacker known as Phineas Fisher offered other hackers up to USD 100,000 in cryptocurrency to carry out attacks on companies as part of the Hacktivist Bug Hunting Program. The program rewards hackers who conduct attacks on companies that could lead to the disclosure of corporate documents of perceived interest to the public. Some examples of proposed targets include mining and livestock companies in South America, the Israeli spyware vendor NSO Group, and the oil company Halliburton.

Security researchers have identified a banking trojan, known as Mispadu, that is delivered through malvertising to ultimately steal payment-card data and online banking information. Mispadu is distributed through emails and sponsored advertisements on Facebook that offer fake discount coupons for McDonald’s. Mispadu has reportedly predominantly targeted countries in Latin America, such as Brazil and Mexico. This operation seems to be targeting the general public. 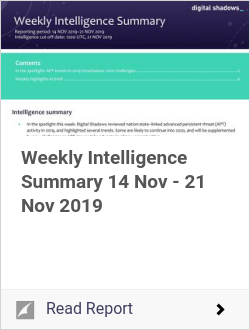