This week it’s a full house with ShadowTalk hosts Alex, Kacey, Charles, Alec and Rick. During this episode they cover:

Following five months of inactivity, the “Emotet” malware resurfaced with three new threat campaigns. In a malspam campaign on 17 Jul 2020, malicious documents were sent as replies within existing email threads, as well as links or Word attachments with obfuscated macros. Another malspam attack, on 20 Jul 2020, resumed Emotet’s practice of installing the “TrickBot” banking trojan. In the third campaign, discovered on 21 Jul 2020, Emotet distributed the Qakbot banking trojan payload. This does not mark the first instance of Emotet using these techniques and payloads. Its operators are likely to vary their attack methods to conduct more impactful attacks.

The FBI issued an alert warning United States companies operating in the PRC to be aware of backdoor malware. The alert stated that the malware is being silently installed on company networks via tax software. The Chinese government mandated that companies operating in the PRC use the software to make value-added tax payments to the Chinese tax authority. The FBI also stated that the backdoors installed have critical capabilities that may enable “cyber actors to preposition to conduct remote code execution and exfiltration activities on the victim’s network”. According to the FBI, any foreign company operating in the PRC is likely to be affected by backdoor malware; officials believe United States companies in healthcare, chemicals, and finance face an increased risk, based on the PRC’s interest in these sectors.

Security researchers reported that the North Korean advanced persistent threat (APT) “Lazarus Group” (aka Hidden Cobra) has started using the advanced, multipurpose malware framework “MATA” to target Windows, Linux (as “DACLs”), and macOS operating systems. Researchers discovered that the group used the framework to find the databases of victims and execute queries to acquire customer lists; in some cases, ransomware was also delivered. Analysis of the malware suggests that Lazarus Group has been using MATA since 2018, and that it contains many components, including a loader. Researchers suggested that the link to Lazarus Group lies in the discovery of two unique filenames in MATA, which have only previously been seen in malware associated with the group. 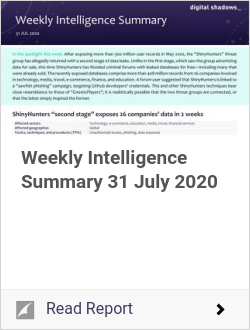