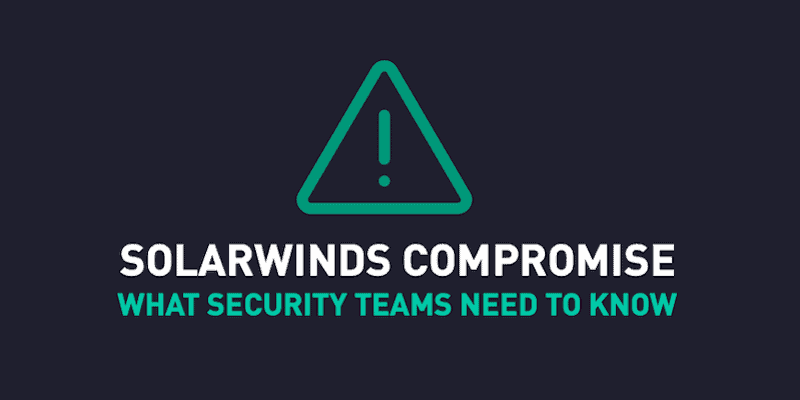 Attackers were able to monitor SolarWinds’ network traffic and maintain persistence on affected systems and environments by leveraging trojanized versions of product updates. The campaign likely began between March and June 2020 and reportedly compromised organizations within multiple industry verticals spanning across North America, Europe, Asia, and the Middle East.

Digital Shadows will continue to update this blog as further details of the campaign emerge. For now, we will explore what’s happening, how the campaign works, and who may be responsible. In addition to this, we have added relevant Shadow Search queries that our clients can leverage to obtain relevant and valuable information as the situation unfolds.

As the SolarWinds Orion platform serves a significant number of customers, organizations may find themselves victims of a related attack due to modern systems’ interconnectivity. To avoid system compromise, SolarWinds urges its customers to upgrade to Orion Platform version 2020.2.1 HF 1 as soon as possible. Additionally, an anticipated hotfix release, slated for 15 Dec 2020, will replace the compromised component and enhance security.

The malicious campaign, likely conducted by a state-sponsored threat group, was based on a “narrow, extremely targeted, and manually executed” supply-chain attack that leveraged trojanized SolarWinds Orion product updates to distribute a malware dubbed “SUNBURST” and “Solorigate” by FireEye and Microsoft respectively.

The DLL file contains an obfuscated backdoor (SUNBURST), which communicates via HTTP to third-party servers and leverages obscured blocklists and scans for forensic and anti-virus tools.

SUNBURST masquerades its network traffic as the Orion Improvement Program (OIP) protocol and stores reconnaissance results within legitimate plugin configuration files allowing it to blend in with legitimate SolarWinds activity.

The attackers then exploited their foothold in the network to access trusted Security Assertion Markup Language (SAML) token-signing certificates, thus allowing attackers to impersonate any pre-existing users and accounts.

Attackers leveraged their remote access to steal data from affected organizations, such as intellectual property and privileged information.

Attackers obfuscated their activity by setting hostnames on their C2 infrastructure to match legitimate hostnames within victim environments, employing IP addresses originating within the victim organization’s country, and implanting a backdoor that obscured blocklists and scans for forensic and anti-virus tools.

Upon gaining remote access with legitimate credentials, attackers removed their tools from victim systems to avoid detection. In this scenario, affected organizations may be left entirely unaware of a system compromise.

TLDR; to be determined. Based on the nature of the attack, it is highly likely that the group responsible for this campaign are extremely sophisticated. Many surfacing reports are pointing fingers at Russian-state-sponsored threat group APT29, but at this point in time, we don’t know enough to confirm attribution.

As we mentioned earlier, we will continue to update this blog to reflect the most up-to-date details pertaining to this campaign. In the meantime, we have compiled a list of useful resources:

If you’re already a Digital Shadows client, we’ve published a Public Intelligence alert and Threat Profile for this event, which include relevant indicators of compromise (IoCs), latest activity, and event updates.

Additionally, we have consolidated a list of queries that you can use to stay on top of details as they emerge:

Query for discussions on forums, chats, and marketplaces:

Tags: Cyber Threats / Data Exposure / Data Loss / shadow search / Supply Chain Attacks / Threat Intelligence
We use cookies on our website to give you the most relevant experience by remembering your preferences and repeat visits. By clicking “Accept”, you consent to the use of ALL the cookies. However you may visit Cookie Settings to provide a controlled consent.