Brand Protection / A NEW DECADE OF CYBER THREATS: LOOKING BACK AT THE TRENDING CYBER TOPICS OF Q1 2020 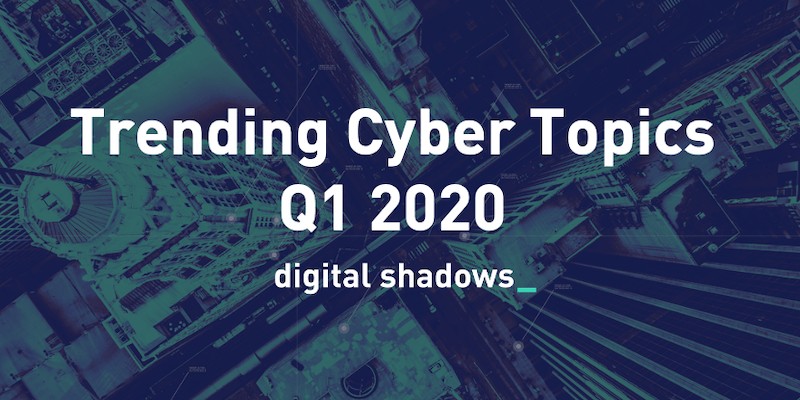 Q1 2020 was packed full of significant global events, including military and geopolitical tensions and the onset of the COVID-19 (aka coronavirus) pandemic. The cyber threat landscape has remained as busy as ever, and the upcoming months are very likely to continue challenging us.

It’s no surprise that cyber threat actors have seen these global events as profitable opportunities. At Digital Shadows, we have been keeping up with these threats and are constantly researching and analyzing the ways threat actors take advantage of current events. As we continue through Q2 2020, we wanted to share some of our most popular research and security trends from the first quarter of 2020.

SOLEIMANI’S ASSASSINATION AND THE CYBER RESPONSE

On January 3rd, 2020, the U.S. conducted a drone strike near Baghdad International Airport in Iraq, killing Iran’s Major General Qasem Soleimani. This controversial assassination was followed by threats of retaliation against the U.S. by Iran’s Supreme Leader Ayatollah Ali Khamenei. After a short period of mourning set by the Ayatollah, on January 8th, 2020, Iran retaliated by launching several missiles at Iraqi military bases housed by U.S. military personnel, resulting in no reported casualties.

Shortly after the assassination, Digital Shadows identified an increase in cyber threat actor activity from pro-Iran hacktivists. The majority of this activity consisted of disinformation campaigns, phishing attacks, and website defacements. We identified several instances of website defacements in the wild, one of the first was from the self-proclaimed hacktivist group Shield Iran:

These defacements marked the first activity from Shield Iran since campaigns in 2015 and 2016 when they were linked with at least 35 self-reported defacements targeting French, German, and American websites. Digital Shadows detected at least eleven other sites that were confirmed to be defaced with the same message above, using the Farsi hashtag #hardrevenge. Our analysts also identified hundreds of other defacements by a threat actor dubbed Mrb3hz4d, who became increasingly active following Soleimani’s killing. Additionally, Digital Shadows also identified HTML code for defacement pages by an Indonesian hacktivist group called G3MB3ZT001 on text sharing websites.

In what was perhaps a surprising twist, there was relatively little activity from Iranian nation-state threat actors following Soleimani’s killing: The majority of publicly reported activity was linked to the Iranian advanced persistent threat (APT) group APT34 (aka OilRig). In the days and weeks following the assassination, several attacks were attributed to APT34, such as the targeting of a government-related U.S. company called Westat: It’s realistically possible these campaigns were at least in part motivated by Soleimani’s killing.

Most of these attacks relied on social engineering techniques for initial access, typically involving spear phishing emails with malicious macro-enabled Excel sheets. In the past, APT34 has primarily targeted government, financial, telecommunications, energy, and chemical industries in the Middle East. Still, the group was also observed targeting U.S. industries and government entities in cyberespionage campaigns.

We have created a list of things that companies can do to protect against threats from nation-state-associated threat groups like APT34:

COVID-19: THE ERA OF SOCIAL DISTANCING

The ongoing COVID-19 pandemic has impacted nearly every aspect of social and business interactions across the globe. Many companies have since implemented work from home policies and began making use of third-party tools, such as video conferencing apps, to continue business as usual. This shift has been natural for organizations already accustomed to remote work culture, but for some, like schools and medical providers, the transition may have been more difficult. Many of these new remote workers were likely not accustomed to teleconferencing platforms, maintained very little knowledge of cyber threats, and may even have been using outdated solutions.

Within a couple of weeks of the virus becoming a topic of discussion in late January, reports of phishing attacks in the wild using COVID-19 related lures already began to appear. These attacks were designed to exploit the public’s fears and uncertainties about the global pandemic: Attacks were observed impersonating health organizations or legitimate informational authorities.

Digital Shadows also observed personal protective equipment (PPE) and purported COVID-19 cures for sale on cybercriminal marketplaces. We also identified listings for illicit drugs that mentioned COVID-19 deals to help attract sales. Some vendors who typically engage in the sale of drugs have moved their offerings to include COVID-19-related products.

In an analysis of potentially malicious third-party mobile apps, Digital Shadows identified 376 Android apps claiming to be related to public health agencies such as the World Health Organization (WHO) and the Centers for Disease Control and Prevention (CDC). Many of these apps requested dangerous permissions on user’s phones, such as the ability to read contacts and access cameras.

We also identified many apps that claimed to offer COVID-19-related functions but contained completely different applications once downloaded. Also, many of these apps downloaded packages containing malware such as adware and various trojans.

Digital Shadows also monitored cybercriminal’s reactions to COVID-19 on dark web forums and identified several conversations about how threat actors could exploit the pandemic for cyber-attacks and financial gain.  For example, we identified the following user on Torum, a popular English-language dark web forum, seeking advice on how to take advantage of the COVID-19 pandemic.

We also observed some unusual discussions on these forums typically used for cybercrime, such as:

There were also many reported instances of cybercriminals exploiting vulnerabilities in video conferencing applications such as Zoom, which have become popular in the current climate for meetings. In our blog covering Zoom security and privacy issues, we observed the following:

STORIES FROM THE DARK WEB

How to Stay Safe

As we come to a close, one question comes to mind. With these continuously evolving cyber threats, what can organizations do to stay safe? These four practices can help organizations and users stay on top of the cyber threat landscape and protect their environment from malicious activity.