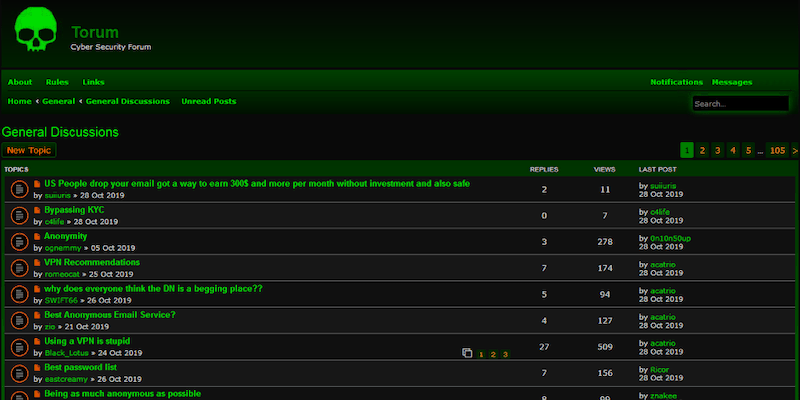 With the recent breach that targeted BriansClub, automated vending carts (better known as AVCs), have received significant media attention in the past few weeks. Although arguably less-known than their forum and marketplace counterparts, AVCs play a significant role in facilitating cybercrime. We’re all familiar with forums and marketplaces (we use them in our daily lives – think Reddit, eBay, or Amazon, for example), but what exactly is an AVC? What do they look like? How do they differ from other cybercriminal platforms?

What is an AVC? 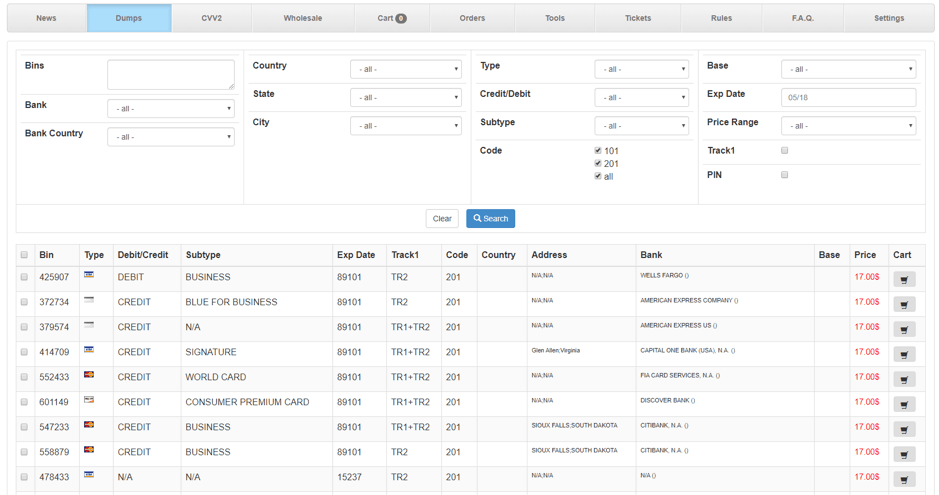 An AVC is a website that sells goods without the need for buyer-vendor interaction, allowing for quick and seamless transactions. These sites can support the sale of a wide range of items such as financial information, app accounts, email accounts, fingerprints, and remote desktop protocol (RDP) accesses. In the case of carding AVCs, credit card or bank account data is available en masse to support the carding economy. Carding AVCs allow prospective buyers to sort through cards for sale via origin country, type, expiry date, bank, price, and more.

An example of the type of information available for purchase on a carding AVC are “dumps”, which are strings of data captured from a credit card’s magnetic strip. These can then be used to create fraudulent, physical “cloned” cards. AVCs also typically sell “CVV2”, or “fullz”. These differ from dumps in that CVV2 and fullz are used for online purchases, and will include more specific data such as the card number, cardholder’s name, physical address, expiry date, CVV, and sometimes even social security number, phone number, and email address. Other sites, like Enigma, also use the AVC model for the sale of hacked credentials. Much like real life, automation certainly is on the rise.

Examples of well-known AVCs include, but are not limited to:

What is a deep or dark web marketplace? 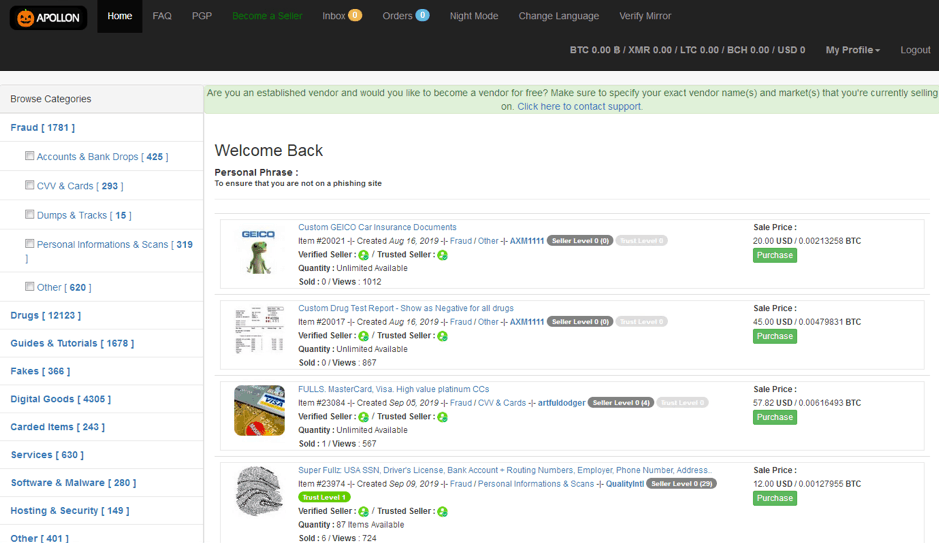 Deep and dark web marketplaces serve as platforms for cybercriminals to buy and sell goods. These goods, however, aren’t your typical organic fruit and vegetable options that you’ll find in the local farmer’s market. Instead, these marketplaces overwhelmingly facilitate the sale of illicit items, such as drugs, fraudulent documents, malware, and counterfeits, among others. Unlike forums, which encourage conversation, and discussion, marketplaces provide a centralized hub to trade illicit goods (commonly drugs) with ease-of-use and accessibility at the epicenter of their business model.

To encourage trading, an eBay-style trust system is enforced, whereby vendors receive ratings from their buyers, typically determined by their sales history and level of customer service. Just like the ratings we use to drive our purchases on eBay and Amazon, these systems exist to weed out scammers and promote only the most reputable of sellers.

However, unlike AVCs, marketplaces also provide the functionality for direct interaction with the seller, normally via a private messaging system. This supports the delivery of goods and in some cases troubleshooting. The current dark web marketplace scene is characterized by uncertainty, with several high profile shutdowns and/or exit scams having occurred in recent months.

Examples of well-known marketplaces include, but are not limited to:

What is a cybercriminal forum? 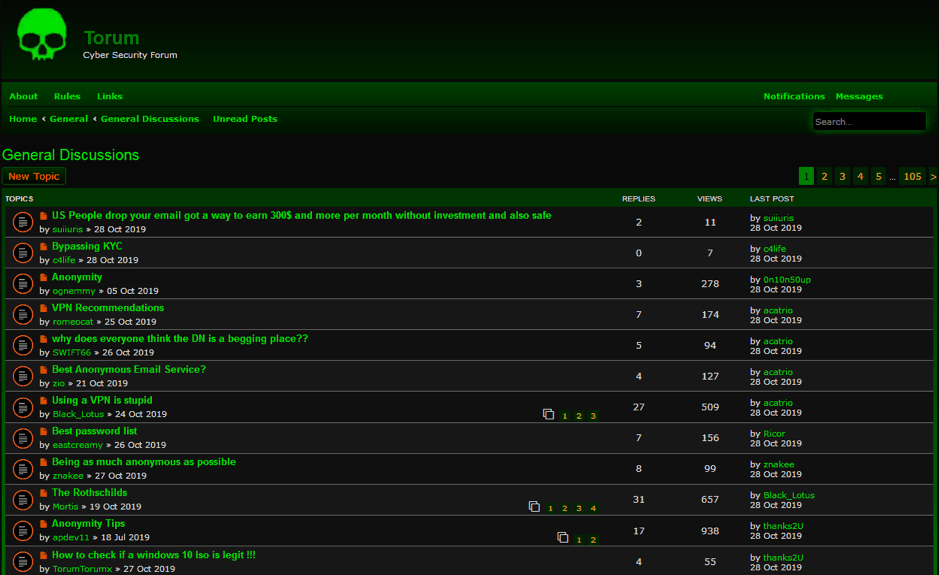 Unlike AVCs, which are automated, and marketplaces, which are largely automated, cybercriminal forums offer a more manual platform for user interaction. In antiquity, the forum – a place of assembly and a place of  discussion – was a central rendezvous point. A cybercriminal forum similarly performs diverse functions, supporting discussion, the sharing of ideas (and other things such as data), and trade. Many are free to browse and join, but others are more restrictive, and require an invitation from a pre-vetted forum member, sustained interaction, or payment. Forums are typically run by a handful of individuals, known as administrators and moderators, which help make sure discussions are relevant and on topic, and house rules are abided by.

Echoing a key function of their ancient forerunners, many cybercriminal forums also feature marketplace sections in which advertisements appear to drive traffic to verified marketplaces, like those highlighted above. Many forums even display listings for goods and services, but these are often more specialized and limited in availability, and, like marketplaces, the credibility of sellers relies on reputation and customer service. For example, a user might advertise the sale of administrative access to a company or a sophisticated piece of malware, but will only be open to discussion with serious buyers. Sometimes they will even demand the buyer to place money into an escrow service ahead of negotiation: Once funds are committed, it’s less likely a would-be buyer will back out of a transaction. It’s win-win for the vendor.

But sometimes trades on forums are fraught with danger; the arbitration section on many a forum is witness to this.

Forums also feature varying levels of membership. Having a certain number of posts, or paying a membership fee, can often give you exclusive perks, such as access to hidden sections or the ability to add color, or “flair”, to your username display. Forums are typically centered around one overarching theme, e.g. a hacking forum, but to keep things neat they will also have sub-forums dedicated to other topics. Even the most nefarious forums can have sections which allow for “off-topic” discussion of movies, music, and video games.

Examples of well-known forums include, but are not limited to:

What’s next for these cybercrime platforms?

While there are many similarities between AVCs, marketplaces, and forums, the three platforms also have distinguishing characteristics that make them stand out as unique. They also cater to very different audiences and needs: AVCs for quick sales, marketplaces for browsing, and forums for discussions. All three are likely to continue coexisting for the foreseeable future, facilitating cybercrime across the open, deep, and dark web.