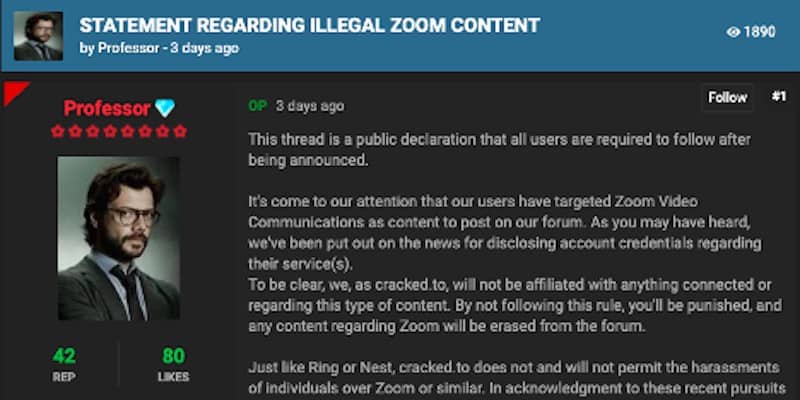 In the last month, you’ve likely been hearing about the video conferencing app Zoom more than ever before. With so many remote workers spread across the globe, teleconferencing has reached peak levels and with it, new IT headaches.

This week had no shortage of Zoom updates within the cybercriminal landscape:

It’s understandable that people would be concerned and get caught up in the Zoom hype, but that’s why the Photon Research Team is here: walking readers through the news, step by step and sharing the relevant information to help IT and security professionals and executives make informed decisions about their organizations.

Jumping into the thick of it, you’ve likely heard two main stories this week, and one you may not have yet.

On April 13th (Monday), BleepingComputer reported that over 500,000 Zoom accounts were being sold on the dark web and other criminal marketplaces or forums.

Let’s break this down a little bit further…

Just reading the headline, you may assume that Zoom has been hacked and all of your accounts and information are potentially at risk of being compromised: this is not the case: Zoom was not compromised. These accounts were gathered using a brute forcing sub-technique called “Credential stuffing”.

Credential stuffing is one of the most common ways for attackers to conduct account takeover. This typically involves the use of automated tools (many of which, like SentryMBA are free, publicly available, and easy to use) to brute-force services with login information from previously leaked credentials, hoping that they match with existing accounts. Attackers rely on people reusing their credentials across multiple services. When these credentials are confirmed to be valid, they can then be collated and sold on cybercriminal forums and marketplaces.

The credentials included within that 500,000 number have likely been culled down from several previous breaches like the 2012 LinkedIn exposures as well as previously reported combo-lists such as Collection #1-5. Credentials included within this “new” 500,000 list are, in fact, the opposite of new. They are usernames/email addresses and passwords which were reused across multiple platforms, including Zoom. Attackers have taken the massive amounts of previously exposed credential pairs, and essentially run them against the Zoom service to find active accounts.

Typically, credential stuffing attacks target popular services like streaming, e-commerce, and travel sites. Purchasing valid credentials for these platforms can give an attacker access to victims’ sensitive personal data and financial information. Much like on legitimate platforms, vendors will adjust their offerings to the demand of their clients. With the current trend of remote working, valid credentials for teleconferencing applications like Zoom have now become attractive commodities.

Digital Shadows has also identified open-source scripts on code sharing websites that specifically target the Zoom API to return lists of account statuses as active, inactive, or pending. These could then realistically be used by an attacker in combination with a credential stuffing tool to only target active accounts.

On April 15th (Wednesday), journalists at Motherboard reported that two zero-day exploits, one for the Windows and one for the macOS Zoom clients, were being offered for sale on exploit trading sites. It’s important to note that there has been no public reporting of the effectiveness of the exploits, no evidence that anyone has purchased the supposed exploits, and no reported attacks using them in the wild.

On April 1st, a user on the English-language cybercriminal cracking forum Nulled, shared a download link to a configuration file (a file containing source code which instructs the designated tool who and how to target) targeting Zoom for use with the credential stuffing tool “OpenBullet.” Only users with privileged forum access were able to view the download link, and the thread had received 24 responses to date, the last of which was added on April 16th. Similar config files have also been shared on other cybercriminal platforms, but some forums have been more averse to the sharing of Zoom-related information than others. For example on April 14th, the administrators of the English-language cybercriminal cracking forum Cracked posted a statement concerning the targeting of Zoom:

Administrators have already removed a significant number of Zoom-related posts from Cracked, likely in an attempt to avoid law enforcement action. Four months ago, the Cracked administrators took similar action against posts with content related to Ring and Nest, claiming they do not condone harassment.

The proliferation of these Zoom config files is significant, and shows there is a growing demand for targeting Zoom accounts with credential stuffing. After installing a credential stuffing tool, an attacker needs to obtain a config file for the specific site or service they wish to target. These config files are typically traded on cybercriminal forums, many of which have dedicated subsections. The more individuals have access to Zoom-specific configs, the greater the likelihood that more Zoom accounts will be targeted.

Our Assessment of the Zoom Security and Privacy Headlines

Hopefully by walking through each of these sections with the facts laid out as plainly as possible, some of the hype and hyperbole has been cleared away. The main takeaways from this week’s Zoom headlines should be:

The existence and sharing of tools like credential stuffing configuration files as well as open-source scripts targeting the Zoom API will undoubtedly continue and contribute to additional attacks against the platform as well as its users. These threats also are unlikely to cease in the long-term; now that Zoom has reached the mainstream, it will likely remain a target for attackers even after the remote lockdowns due to Coronavirus passes.

The ability to carve out the salient and relevant information from highly publicized reports like the ones released this week is not simple. Relying solely on news reporting without any additional analysis to inform decision making likely won’t include how the new developments relate to specific issues that your organization grapples with on a daily basis. Intelligence, and specifically cyber threat intelligence, is crucial to guiding and informing decision makers about the cyber threat landscape without overloading already busy professionals with more noise and confusion.

How to Secure Your Zoom Communications

There are several Zoom-specific steps and best practices that individuals and businesses can follow to ensure their communications are secure.

A more in-depth best practices guide to securing your Zoom meetings can be found here.

Additional strategies for protecting your Zoom accounts will largely fall in line with best practices for securing other personal or corporate accounts.

Want to stay up to date with our threat intel news? Subscribe to our email list below and we’ll send these straight to your inbox: