Cybercrime and Dark Web Research / A Growing Enigma: New AVC on the Block

A Growing Enigma: New AVC on the Block

This week, in a ground breaking announcement, the Bank of England named Alan Turing the new face of the £50 note for his mathematical achievement in cracking the German Enigma in WWII. His contributions in coding and cryptography gained insight into German strategies and provided invaluable intelligence to the allies.

At Digital Shadows, we recently cracked an Enigma of our own (in a way), as we discovered a new dark web AVC that is growing in notoriety amongst cybercriminals – fittingly titled Enigma. In five months of operations, Enigma has nearly doubled its listings and expanded its market share, making it a legitimate player in AVCs.

AVCs stands for Automated Vending Cart, which typically facilitate the automated sale of banking information, such as credit cards. These AVCs automate the sale of this stolen data with prices ranging from $1 to $100 on prominent AVCs such as Joker’s Stash, Blackpass and Brian’s Club. As well as banking information, this newcomer, Enigma, utilized this automated sale system for the hacked credentials trade – which are in demand for cybercriminals looking to conduct credential stuffing attacks. 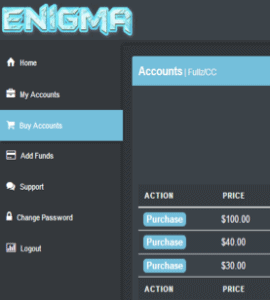 The founder of Enigma has been traced back to the alias Stackz420, which belongs to a credential stuffing threat actor. After over two years building their brand across the cybercriminal underground, they have been busy advertising their AVC across dark web platforms, hoping to gain traction amongst cybercriminals – and it’s working.

Enigma has nearly doubled its listings since the site’s launch in February 2019. In February, the site initially offered around 11,000 listings for sale, which has increased to around 20,000 as of July 2019. These listings typically include bulk usernames and passwords from very prominent organizations.

Enigma lists the credentials by the organization they are stolen from, so threat actors can purchase this data and gain direct access to these corporations or use these usernames and passwords for credential stuffing attacks on other corporations.

Additionally, the site has also added a process for requesting and commissioning cracked accounts. This includes a new area of the market where administrators can go out and actively try and gain access to specific accounts that other cybercriminals desire.

Stackz420 – The Founder and Administrator

Digital Shadows first observed Stackz420 in 2017, active historically on prominent marketplaces such as Dreammarket, Rapture, Empire, as well as across cybercriminal forums and Pastebin. This presence was crucial for building a brand. Below is a screenshot of the latest Shadow Search results on Stackz420. 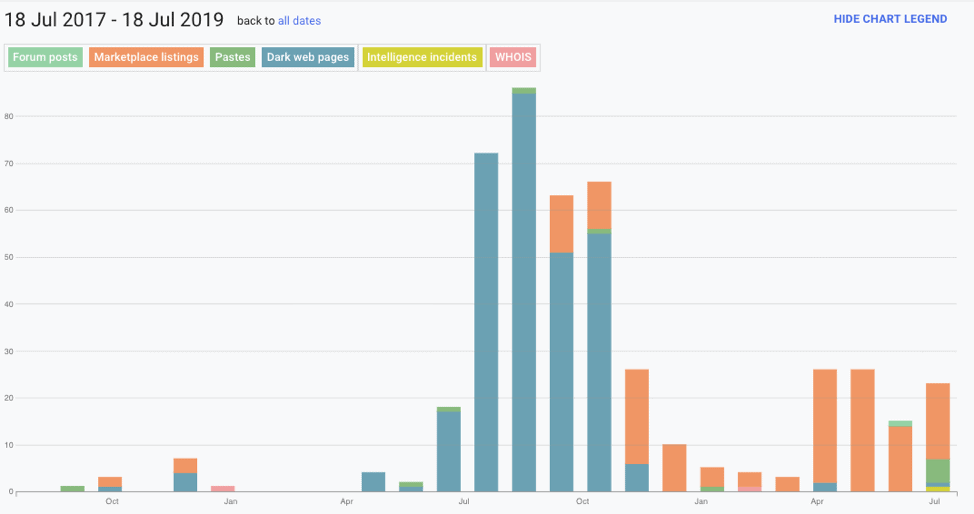 A timeline of Stackz420 activity over the past two years. Source: Shadow Search

Unlike the dark web marketplace model, which was disrupted following the demise of Hansa and AlphaBay, AVC sites continue to thrive. Enigma is no different.

With a significantly increased number of listings and a notorious administrator, it’s likely that it will continue to grow in size and significance over the mid-term (next three to 12 months). This is likely to attract an increasing number of cybercriminals. For now, it’s important for the security industry and threat hunters to be aware of this new AVC so it can be monitored for misuses of your or your client’s data.