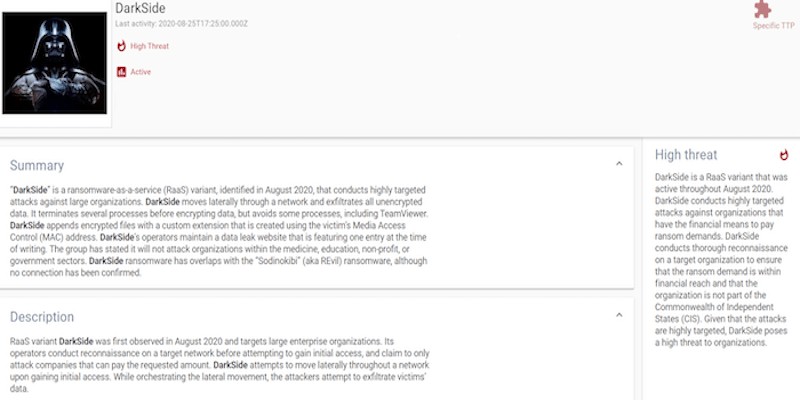 We’ve recently observed the emergence of a new ransomware operation named DarkSide. The nuance of the operation includes corporate-like methods and customized ransomware executables, which have made headlines. When it comes to analyzing new ransomware campaigns, one might ask, “how innovative is this threat compared to previous ones?” Well, DarkSide is no different from its counterparts but is indeed the latest representation of the rising Ransomware-as-a-Corporation (RaaC) trend. Cybercriminals have seen their revenues steadily increase in the last years, making the ransomware market extremely prolific. Consequently, we’ve observed frequent attempts from threat actors to upscale their operations’ external appearance to improve their reliability and reputation.

In the past month, Digital Shadows has been closely monitoring DarkSide, owing to their recent operation premiere and the interesting methods they utilize throughout their campaign. Since the threat intelligence nerds at Digital Shadows find this new operation so fascinating, we wanted to create a blog to detail our findings.

With that said, come with us to the DarkSide (see what we did there?) to get the skinny on our recent discoveries.

The DarkSide operation is hardly innovating in terms of tactics, techniques, and procedures (TTPs) used by other threat actors. The group shares its methods with infamous names like DoppelPaymer, Sodinokibi, Maze, and NetWalker. Many researchers that have analyzed the DarkSide ransomware agree that there are significant overlaps between this operation and those mentioned above. What, then, makes DarkSide particularly interesting? The answer is threefold:

The group behind DarkSide announced its new ransomware operation via a press release on their Tor domain in August 2020. Up until this point, some researchers have claimed that the group has earned over one million USD; however, Digital Shadows cannot corroborate a definite figure at the time of this report. Possibly in an attempt to underline their experience, they made a point to clarify that the DarkSide operation isn’t their first criminal experience; the campaign was developed to refine existing products into the ultimate ransomware tool.

The press release stated several ethical principles that guide the group’s decision process regarding their potential targets; they claim that the DarkSide operation will never target critical and vulnerable bodies such as schools, hospitals, or even governments. We’ve seen other groups claim to stay away from specific sectors (ahem… Maze); however, a recently unattributed ransomware attack, which targeted Duesseldorf University Hospital, may have inadvertently caused a woman to lose her life. With these tragic concerns in mind, we’ll see if they stick to their plan. To go even further, the group behind DarkSide states their intent to select their targets based on their financial revenue. This method implies that a ransom price is modeled around the victim organization’s net income.

The operators behind DarkSide harvest the clear text data from their victim’s server before encrypting it and requesting a ransom. The stolen data is then uploaded to DarkSide’s leak website, which serves as a powerful extortion tool for the threat group. The targeted company risks sensitive data loss after a successful attack, and not to mention, a public breach can severely damage an organization’s reputation. If this tactic sounds familiar to you, you’re right on the money – we’ve been closely following the pay-or-get-breached trend since late 2019.

As we mentioned earlier, other ransomware operators have claimed to remove specific sectors from their attack itinerary. DarkSide’s claim to avoid attacking companies within the education, healthcare, and government sectors can appear professional and respectable. Nonetheless, some promises are broken, and it is yet to be seen whether DarkSide will maintain its stated intentions.

DarkSide has additionally claimed that they choose their targets and determine a suitable ransom based on an organization’s financial revenue. It’s unconfirmed where DarkSide sources their organizational finance information from; however, Digital Shadows has found that, like many other ransomware operators, they may leverage relevant details from ZoomInfo.

DarkSide’s operators customize the ransomware executable for the specific company they are attacking, indicating that they customize each attack for maximum effectiveness. The ransomware executes a PowerShell command that deletes Shadow Volume Copies on the system. DarkSide then proceeds to terminate various databases, applications, and mail clients to prepare for encryption. However, the following processes are avoided:

Although unconfirmed, it is realistically possible that the operators use TeamViewer for remote access to computers, as it is rare that this process would be avoided.

Each customized executable includes a personalized ransom note, which consists of the amount of data that was stolen, the type of data, and a link to the data on the group’s data leak site, where victims’ information is leaked if a ransom demand is not met. While the site only references one compromised organization at the time of this blog, we plan to keep an eye on this group. In the meantime, we have listed DarkSide’s current indicators of compromise (IoCs) and their associated MITRE ATT&CK techniques at the end of this blog.

DarkSide attempts to build trust with the victim and the other actors involved by leveraging professional communication methods. Over time, we have found that trust plays a pivotal role in the cybercriminal world and often determines the possibilities of an entity’s growth and expansion. For example, the English-language marketplace, Empire, had long represented a trust stronghold on the dark web, favoring its establishment in the underground scene – until recently, when rumors of a possible exit scam started to circulate and gain increasing traction.

The use of a press release to announce a new ransomware operation is a symbol of the threat actor’s intentions and maintains a dual-use:

This operation isn’t the first time a threat group has used a press release to communicate its latest operations or threaten a victim. Many of us remember the campaigns conducted by “thedarkoverlord” in 2016 and 2017, which leveraged press releases in the wake of their attacks. Even more recently, in May 2020, REvil ransomware operators posted press releases to pressure their victims, which overtly named the compromised organizations and claimed to double their ransoms.

Although this operation displays a unique combination of tactics, communication, and ethical claims, DarkSide merely seems to be the latest product belonging to the growing trend of ransomware professionalization.

As RaaC continues to remain a popular method due to its rewarding financial return, we plan to see new threat groups with differing technical capabilities entering the ransomware Thunderdome. Whether or not they’ll succeed in breaking the mold – only time will tell. While the cyber threat landscape can be unpredictable and volatile, a trend is a trend, and we will continue to monitor the cybercriminal bandwagon closely.

Tags: Cyber Threats / DarkSide / Ransomware
We use cookies on our website to give you the most relevant experience by remembering your preferences and repeat visits. By clicking “Accept”, you consent to the use of ALL the cookies. However you may visit Cookie Settings to provide a controlled consent.