Cybercrime and Dark Web Research / Probiv: The missing pieces to a cybercriminal’s puzzle

Probiv: The missing pieces to a cybercriminal’s puzzle 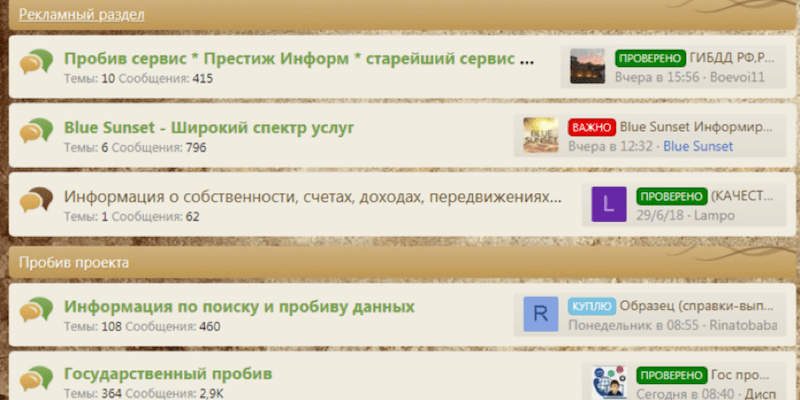 A husband wants to find out who owns the unknown number that’s been ringing his wife’s cell phone late at night. A private detective needs to track the location of the missing person they’ve been tasked to find. A fraudster would like to obtain a bank account holder’s passport details for an elaborate scam designed to steal the victim’s savings.

In any typical circumstance, that missing piece of information would be difficult to track down, and rightly so: This data is categorized as personally identifiable information (PII), and entities holding this type of data must protect it accordingly. But in the cybercriminal underground, there’s a service (and even a dedicated platform) that enables anyone to obtain sensitive information via insiders: Probiv. 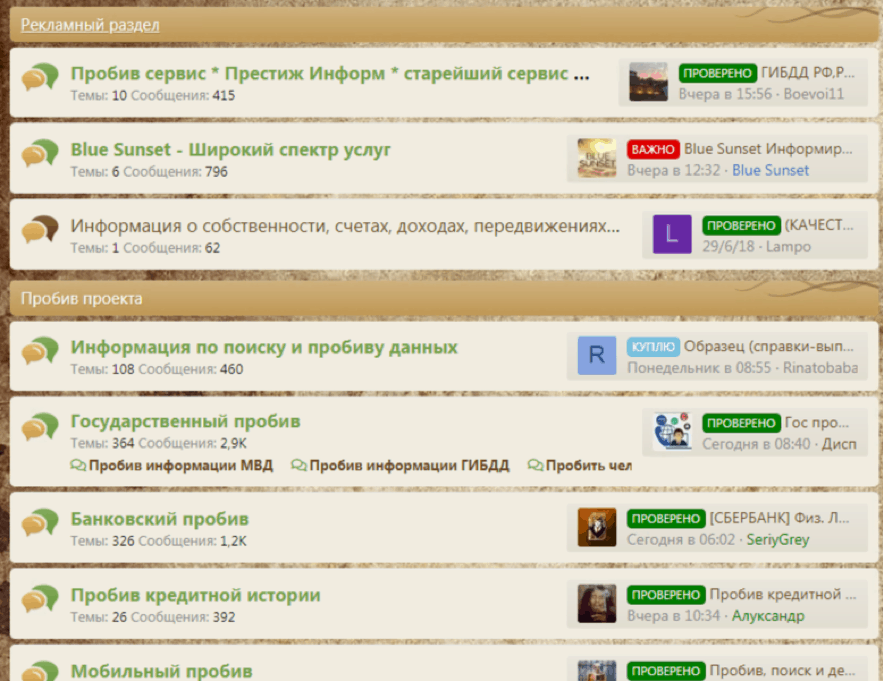 Figure 1: Screenshot from the Probiv forum

The type of information that can be obtained depends on the nature of the initial piece of data submitted as well as the specific service with which the buyer engages. Offerings can range from exclusive access to passport agencies (which would allow a user to obtain details of the victim’s address or date or birth etc.) to account holder details for a financial service or data from telecommunications companies revealing the location of a cell phone owner. Service providers usually advertise a range of specialized offerings that draw on specific sources, including telecommunications companies, state agencies, and banks. 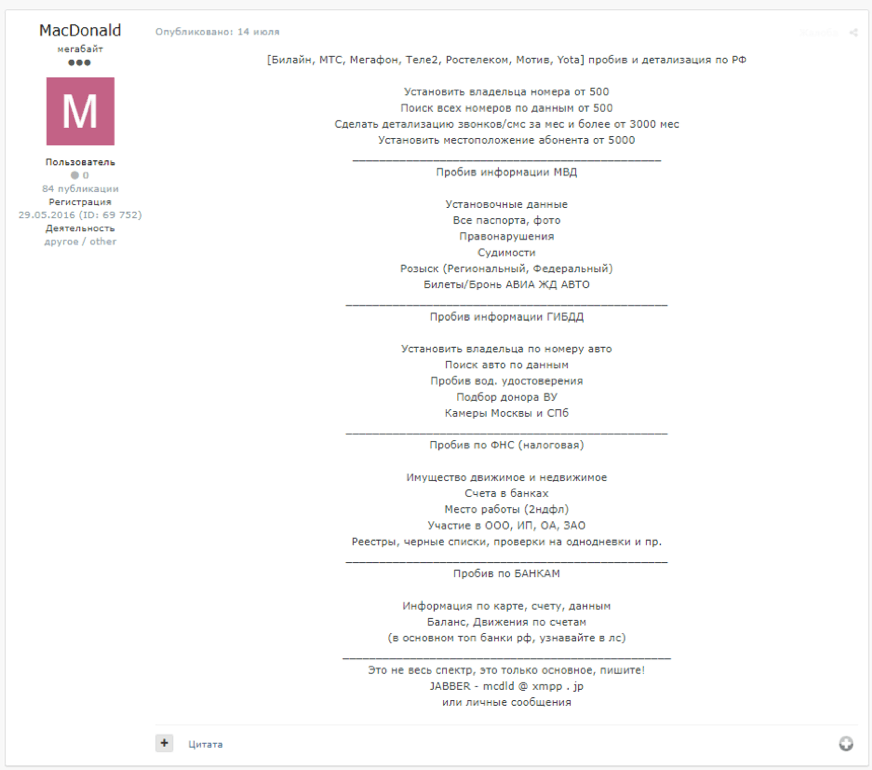 Forum posts and investigative journalists have suggested that sourcing such sensitive information in the Russian-language cybercriminal community is facilitated via employees using their privileged position to perform searches on internal systems to obtain data requested by the forum vendors, who act as intermediaries. As such, probiv differs from look-ups that use historic leaked databases to perform searches: Probiv vendors can offer real-time, up-to-date information belonging to the target as long as their sources are still employed by an organization.

For example, one vendor on a prominent Russian-language forum uses data from cell phone companies to offer buyers the ability to:

The same vendor draws on government data to offer:

The vendor also uses banks’ records to obtain information on bank cards and accounts, including the balance, withdrawals and payments, statements, and code words to access the account. Prices vary depending on the sensitivity and scope of the information requested, ranging from RUB 600 to 5000 (USD 9.39 to 78.25 at the time of writing).

In order to purchase a probiv lookup, a buyer must contact a vendor with a specific piece of information belonging to the victim and outline their requirements as to the additional data they need. Vendors usually provide multiple contact details for this initial contact, including forum private message, Jabber IDs, or Telegram handles.

Buyers looking for cell phone data may wish to track a missing person or estranged lover. Buyers seeking bank data may want to conduct financial fraud. The motivations vary depending on circumstance.

The incentives for the seller or the criminal employee are less personally driven and more financially motivated. Especially in Russian-speaking countries, where wages tend to be lower than in other European nations, engaging in probiv services may provide valuable additional income. However, probiv isn’t a scalable solution: Given the manual nature of the scheme, services can only handle small numbers of requests at any one time. The process also relies on a ready supply of willing employees prepared to jeopardize their positions within an organization.

What about the English-language scene?

In terms of makeup, the major difference between these offerings and the Russian-language probiv scene is that the English-language functionalities tend to be automated or self-service: They offer users the ability to search on their own, rather than providing their criteria to a vendor who makes the enquiries. The information available likely draws on existing databases, rather than offering real-time intelligence.

For instance, some English-language automated vending cart (AVC) sites selling credit/debit card information feature a small subsection that allows users to search for a social security number or date of birth associated with a name, likely drawn from data stored in the site’s collection of credit card information. A now-defunct dedicated site called SSNDOB served the same function. Many users on English-language platforms also offer services to parse the databases they possess for specific criteria.

In April 2019, a user on Hackforums—generally seen as the domain of beginners and script kiddies—offered to use their privileged position working in a telecommunications company’s call center to perform searches on internal systems and provide information about cell phone owners. In August 2019, a user on the recently launched English-language forum Torum offered to perform probiv look-ups in systems belonging to an insurance company to which they allegedly had access. In this instance, if the buyer could provide specific data such as a victim’s email address, the vendor would provide the victim’s personal data, including telephone numbers, physical addresses, full names, social security numbers, medical history, and United States immigration status.

Notably, these real-time, customized probiv services offered on English-language platforms are extremely limited and specific: Vendors who find themselves with privileged access to a company’s internal systems can perform look-ups within that organization. However, if buyers’ targets are not customers of that company, the look-up will be unsuccessful. In contrast, Russian-language vendors can use an entire network of banks, telecommunications companies, and government agencies to return substantive results for their buyers. An English-language vendor offering an entire range of sources within one service would likely be regarded with suspicion by forum members, who may view the offering as a potential honeypot.

What accounts for these differences?

Perhaps due to the scarcity of high-value probiv offerings in English-language forums, English speakers have increasingly been turning to Russian-language forums to request these look-up services. Recently, Digital Shadows observed (Figure 4) a user on a Russian-language forum looking for driver’s license look-ups for US states and another looking to find bank account information associated with individuals’ names. However, such requests tend to go unanswered, likely due to the lack of available information for citizens of Western nations compared to those from former Soviet Union countries. Even if the English-language scene improves its stability and the quality of the offerings that vendors advertise, it is unlikely that the probiv scene will begin to flourish on English-language platforms. Such a development would require dozens of willing individuals to participate in probiv networks. The market for real-time individualized look-ups on Russian-language platform is, in contrast, unlikely to diminish in the near future. 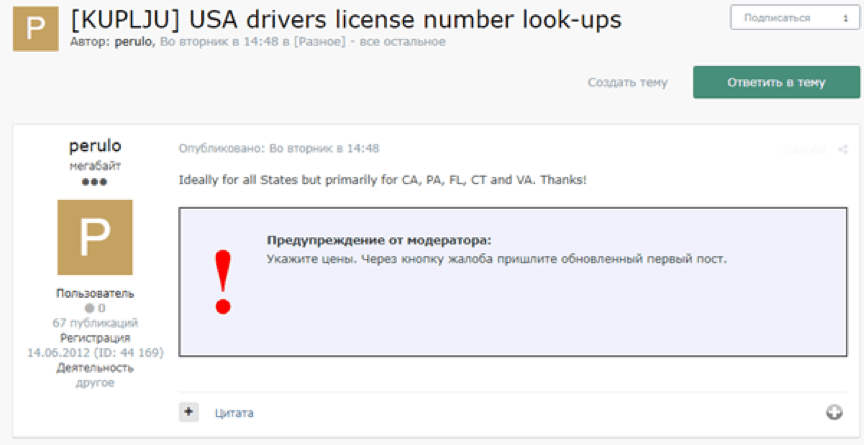 Figure 4: User on Russian-language forum looking for driver’s license look-ups for US states

What can you do to mitigate the threat of probiv?

To avoid becoming the victim of probiv, here are some steps you can take that may help reduce the risk of falling foul to this particular cybercrime:

To stay up to date with more dark web trends and threat intelligence updates, subscribe to our newsletter below.