Colonial Pipeline Ransomware Attack: What we know so far 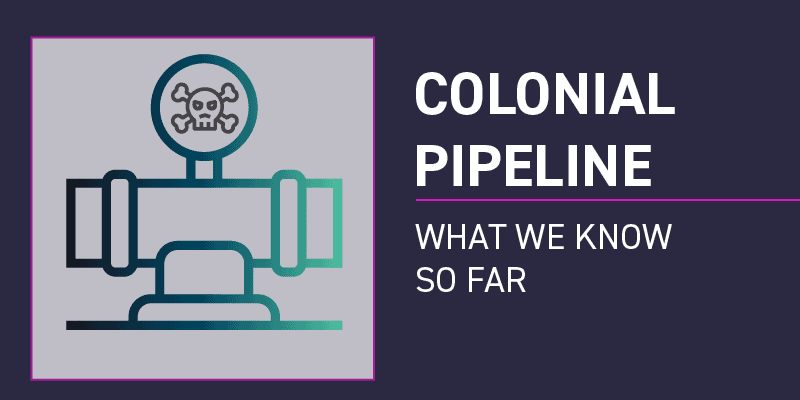 On 07 May 2021, a ransomware attack impacted the network of the US energy operator Colonial Pipeline disrupting operations and the wider oil supply chain.  Colonial Pipeline distributes almost half of the oil-related fuels on the American East Coast, making this ransomware attack the latest incident targeting critical infrastructure in the United States. The attack additionally highlights the potential for cybercriminal adversaries to disrupt business processes and impact critical functions.

Digital Shadows is closely monitoring the developments associated with this cyberattack and will update this blog as new details emerge. For the moment, we will explore what we know so far, review associated security recommendations, and discuss the attribution to DarkSide.

On 07 May 2021, the company learned that it was the victim of a cybersecurity attack that has been confirmed as involving ransomware according to a Colonial Pipeline press release. The attack happened on Friday, a typical day for malicious activity as cybercriminals aim to exploit the weekend when security teams are not at total capacity. Details about the tactics used by the attackers are still unknown. However, as a result of the ransomware campaign, Colonial temporarily halted all its activities and began working with security and forensic professionals to restore its IT infrastructure.

In the meantime, the US Department of Transportation has released emergency legislation to relax rules on oil transportation by land to mitigate the supply disruptions caused by the ransomware attack. This move comes at a sensitive time to meet fuel demands worldwide and reduce the burden on strained refineries in Texas.

On 10 May 2021, the US Federal Bureau of Investigation issued a statement confirming attribution of the Colonial Pipeline attack to the DarkSide ransomware group. DarkSide emerged back in August 2020 and was created by several ransomware operators willing to make the “perfect product” to meet their needs. The malware initially didn’t differ enormously from its counterparts from a technical standpoint; instead, their corporate-like approach to the ransomware business represented at the time a unicum for the threat landscape.

The known tactics, techniques, and procedures (TTPs) linked with the attack align with what Digital Shadows previously observed from this ransomware group. Given previous DarkSide operations, it is realistically possible that the attackers gained entry to the Colonial Pipeline networks by buying remote access from Initial Access Brokers (IABs). These “men-in-the-middle” cybercriminals provide ransomware organizations with a rich pool of victims to target. According to our research Initial Access Brokers: An Excess of Access, Remote Desktop Protocol (RDP) was the most common access vector advertised in 2020 by IABs.

Consequently, it is realistically possible that the ransomware group that attacked Colonial Pipeline might have exploited a similar method to access the targeted environment. Digital Shadows previously mapped these campaigns to MITRE if you’re interested in how compromised RDPs help cybercriminals gain unauthorized access to systems.

Interestingly enough, on 10 May 2021, DarkSide published a press release on its data leak website claiming that they are not affiliated with any government and are solely financially motivated. This statement comes after increased allegations that this group operates from Russia, an assessment based on DarkSide’s victims’ pool, and some linguistic peculiarities that suggest that its operators are native Russian speakers.

This incident is a topical reminder of the risks connected with business disruption at the level of critical national infrastructure. The increasing convergence of Information Technology (IT) and Operational Technology (OT) can put critical infrastructure at risk of being targeted by malicious cyber actors, both state-sponsored and criminally organized. Evaluating the benefits, risks, and costs associated with connecting OT to the internet should be a key priority for the stakeholders involved. Additionally, employing appropriate preventative measures can go a long way in detecting and mitigating these attacks quickly and accurately.

Some key recommendations include keeping OT systems off the internet and intermittently bringing them online only for critical actions, such as patching and updating. Having a thorough emergency response plan and a trained staff to respond to potential attacks can also significantly impact how these incidents are handled.

Traditional cyber hygiene measures apply too— regularly backing up data, segmenting the network, and implementing multi-factor authentication are some of the key activities that security professionals will need to take into account. Additionally, maintaining visibility in the OT environment is critical to detect, mitigate, and respond to potential threats. See the latest National Security Agency (NSA) advisory for more detailed defensive strategies about connected Operational Technology.

Attacks against critical national infrastructure are among the most current cyber threats faced by governments and organizations worldwide. These attacks can potentially have severe effects on a massive number of individuals, businesses, and institutions. Consequently, ensuring early detection and quick remediation of these threats should be a key priority for everyone involved.

The ransomware operation against Colonial Pipeline is another crucial reminder of the potential risks involved with this kind of attack. Luckily, no physical harm was directly caused by this cyber operation; however, the potential for business and energy distribution disruptions is great enough to pose a threat to US national security.

Digital Shadows will continue to monitor the situation and update this blog as further details are uncovered. In the meantime, you can stay up to date on the latest threat intelligence events by viewing our Cybercrime and Dark Web Research articles.

Tags: Colonial Pipeline / Cybercrime / Gas / Oil / Ransomware / Threat Intelligence / Utilities
We use cookies on our website to give you the most relevant experience by remembering your preferences and repeat visits. By clicking “Accept”, you consent to the use of ALL the cookies. However you may visit Cookie Settings to provide a controlled consent.